Manage the build-up and operation of a space station in this management/business simulation. Space MAX is one of the more interesting games of this genre, which flooded the German market in the late 80's and early 90's-- and one of the best of its kind. A quality game into the last detail, and after all it's much more fun to manage a NASA space-station instead of a wineyard as seen in Winzer. Not as strategy-oriented as Interplay's Buzz Aldrin's Race into Space, as the emphasis here is on simulation. Overall, probably one of the best space station simulations ever made-- much better than Accolade's Apollo 18 and more realistic than Karl Buiter's classic Earth Orbit Stations, althought arguably not as playable.

Note: the download here includes both the official German version, and the never-before-seen English version that was finished, but never released. Just run the appropriate .BAT file to start either the English or German version. The manual is German only. 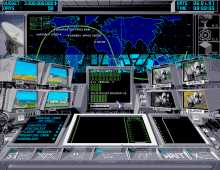