Two of the best-loved "cult classics" of all time, Sopwith and its much-improved successor, Sopwith 2 are classic CGA games that gave birth to the genre of flying-planes-to-destroy-stuff. Among the now-legendary gameplay, the original Sopwith even had multiplayer network options that took advantage of BMB Compuscience's "Imaginet" network product (As a matter of fact, the game was designed precisely to demonstrate Imaginet, according to the author).

So what is special about Sopwith and its sequel? The best answer is that both games are just incredibly addictive and fun. Sopwith is a side-scrolling biplane action game involving two sides: cyan and magenta planes. Your goal in single-player is to destroy all of the enemy buildings and vehicles, either by shooting, bombing, or colliding with them. To stop you, the enemy has deployed planes to shoot you down and buildings that shoot anti-aircraft fire at you. Each level ends when all the enemy buildings and vehicles are destroyed, and is followed by a faster and more difficult level with the same map. Despite being an arcade game, all the elements of a good flight simulation are included, including limited ammo, ground-based artillery, limited fuel, and a limited number of bombs.

What makes Sopwith legendary is the ability to handle up to 8 players in multiplayer mode (4 human and 4 computer).

The original Sopwith did not have much of a physics model, and the AI was quite weak. Sopwith 2 improves upon the original in various ways, including more intelligent enemy planes, more enemies (inlcuding pesky birds), larger explosions, deformable terrain, and a cool real-time radar and mapping feature. Best of all, Sopwith 2 was coded with an internal timer that allows the game to play at the same speed on modern Pentiums as on IBM XT computers (similar to Alley Cat).

With exceptional playability, simple controls, and many surprises, Sopwith and Sopwith 2 are simply must-haves for every arcade fan. Also be sure to check out Sopwith: The Author's Edition-- the definitive and best version of the game, released as freeware by designer David Clark in 2000.

This game is totally wicked and plays an important part in the whole world of gaming. This game was made way back in 1984, before many games were born. I'd never had a game where you were in a plane and you got to take off and fly into buildings. Then to make things even more fun, you could bring in a computer-controlled plane to try and take you out, or you take them out. The computer controlled plane was just too clever for me, and maybe it was a bit too hard.

Playing it on your own was ok. You just had to keep the plane in the air and make it to the end of the screen. There was only one level and when you completed it you finished the game. Funnily enough the game literally ended ;) One good thing to note was the bottom of the screen. There was an overall map of the level, so you could see the whereabouts of planes in the level. Of course some might think of this as a spoiler.

The graphics were your typical CGA (pretty in pink). The sound was the PC speaker. This game was noisy and the sound of the plane could drive you nuts after a while. But its still much better than no sound, and was heaps of fun as you could go 'brrrrrrrrr' and sing along with the plane.

I think this game could have done with more levels. But if you are interested in way old games, and want to see the work of the forefathers, then check out Sopwith, and also Sopwith 2 which can also be found on this site. 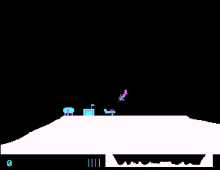