Ever fancy yourself a flying postman? If yes, then I might have a game for you. Meet Solo Flight, the very first flight sim from MicroProse and the genius designer Sid Meier. In this little game, you fly a civilian single engine prop-driven plane across the US delivering mail.

You can play the game in 2 modes, training and actual mail run. The training mode actually give you basic knowledge needed to play much more complex sims, like how to take off and how to perform basic navigation, and how to handle different weather conditions. Being a civilian flight sim, this is basically what you do... you know, don't expect any shooting.

So, what about the graphics then? Being an early 80's sim, don't expect much in this department. Pink landscape and cyan skies are the norm here for the PC version (The Amiga version is much, much nicer). For me, lying around without shooting while admiring photo-realistic environment like in Flight Unlimited 3 is fine. Or having a tense action while viewing a 4 color CGA graphics is also fine (F-19 came to mind). But Solo Flight simply has neither, and for me, this little game is a pass.

In my opinion, Solo Flight is ulimately only good as a historical interest-- a proof of Sid Meier's ingenuity and a reminder of how much we have gone with today's graphics. Why didn't I say today's gameplay as well? Simply because for a civilian flight sim, there is nothing fundamentally wrong with Solo Flight's gameplay. A flying postman is no bad idea at all. 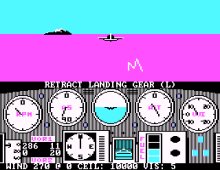 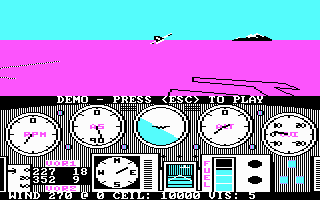