One of the rarest versions of Maxis' genre-defining SimCity series, Simcity Classic is a good Windows 3.1 version of the original game, ported by Azeroth. The review on MobyGames says it all

The original SimCity is a classic, and this is but a translation of it to the Windows environment. The gameplay is familiar, system specs need not be powerful (unlike for the newer Sim installments), and gameplay is a bit smoother than on the standard DOS version. Building a city from scratch is fun, and allows a person to experience the joys of being a ruler. Build cities "organically" like London, or build your city according to a larger over-all plan, like Washington DC.

While the experience of playing SimCity is fun, the overall game is rather pointless. There is little to do once you find that happy middle ground of taxes and spending- wait for enough funds, tweak your city a bit, wait for some more funds. Some have said that to "win" you must lay out your city for mass public transit (with no roads) which strikes me as a lopsided statistical modelling job. Granted, Will Wright could mold the game in any fashion that he desired, but SimCity seems a weird place to trumpet one's own ideological utopian vision.

The pre-planned scenarios aren't very fun- once a grasp of the basic concepts of the game are in hand, demolishing buildings to build police stations in hot spots or bulldozing districts to stop the spread of fire just feel like boring puzzle games. The use of windows in this game, while allowing more flexibility than the DOS version, can get unwieldy.

It started and defined a genre that no other series has ever been able to touch- city planning games. In retrospect, the game is a lot like Balance of Power: the ideas are awe-inspiring, and the execution creative, but the game itself leaves a bit to be desired. The fun in this version of SC is akin to the fun one gets with a paint program, not necessarily a game program. Future SC entries improve on this, and are worthy as game *and* social experiment... but this one is just a very well-done curio." You can also grab extra graphics packs that Maxis released as add-ons below - they were meant for DOS but works with this Windows 3.1 version as well.

No two ways about it, this is the original king of the Sim games! I can remember playing this game in school; in fact it was one of my first interactions with computers besides video game consoles.

The premise of the game is simple: build, manage and sustain a city from the ground up. You zone land, guide traffic, and appease your citizens. Using the natural boundaries and landforms your goal grows into maximizing your lands potential.

Just hearing this description makes the game sound kind of boring, I'm sure. But it's actually very absorbing. Once you start seeing people moving in, it starts motivating you to get some decent industrial. And once that gets going, you want the commercial. And of course, you introduce crime with all these people and businesses, so you build police stations. And then the citizens demand a fire department, and then they want a seaport, and then an airport, and before you know it, you're managing your town and enjoying it.

Those of you who are familiar with SimCity 2000 or 3000 will enjoy the more relaxed pace and more simplistic nature of SimCity Classic. Your management is down to zoning, traffic, and power. Those who thought the disasters were a bit too much in 2000 will actually find them kind of fun in this game. Because money is a bit easier to come by, it adds a nice additional challenge. You might even unleash a monster on yourself just to spice things up.

Granted, real city management and SimCity management are two different things. The first thing that comes to mind is traffic: in the SimCity ideal, nobody drives cars, everything is railroads. Now, I'm all for public transportation, but that's just not realistic. I've found the best way to build high yield residential housing in SimCity is to build a three by three grid of residential and fill the middle with parks. Whatever can be said for this ideal, you just don't see it in real life. And the seaport! At best, you get a nice little river running through your city, there's no way you're going to get any commercial seafarers coming through. And do I even need to get into the monster attacks?!

The bottom line is: Sim heads are going to love this game: even if they find it a little simplistic, there's plenty of enjoyable "work" here. And certainly if you're new to the genre, there is no better place to start. There's no real boring parts of this game. Just when your last little area of development gets going, you'll be ready to move on to the next piece. Those who are twitch-heads who live for shoot-em-ups or first person shooters, or those who don't want to immerse themselves in a multi-hour game might want to steer clear.

All in all, SimCity is one of those games that deserves its reputation as a fun, innovative title that launched a genre. 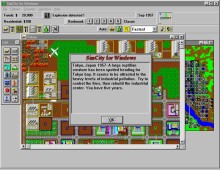