One of the most obscure Epyx games ever made, Snow Strike is an okay arcade-oriented flight sim set in one of the more exotic theatres of operations: Columbia. Your mission is to pilot F-14 fighter on covert operations to stop the drug barons once and for all.

Snowstrike is not meant to be a realistic flight sim, nor does it pretend to be. Most gauges in the cockpit graphics are for eye-candy only, for example, and all you really need to do to successfully finish the missions is good reflexes and trigger-happy fingers. The game is similar to SEGA's arcade hit Afterburner in this respect, with a good variety of enemy planes to shoot down, fast and furious action, decent graphics, and smooth joystick controls. Overall, a great arcade-ish sim that does give some nods to simulation aspects, but not a whole lot. Hard-core flight sim fans should try something else, or play this during breaks from A.T.A.C. 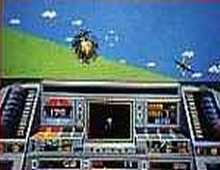 People who downloaded this game have also downloaded:
Pacific Strike, Aces of The Deep, Microsoft Space Simulator, Wings of Glory