SimPark teaches the importance of ecological balance in visual and easy-to-grasp ways. For example, the player soon learns that if no flat-leafed flowers are planted, the park won't attract bees. And if the park doesn't attract bees, pollenation won't occur and the park cannot thrive. SimPark also requires kids to identify the park's plant and animal life in addition to properly managing its animal and plant population. Overall, it's a solid "lite" version of SimIsle that allows kids to have fun while learning just how delicate the balance of nature really is. 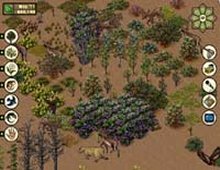