This is one of the most intriguing game concepts of all time-- and the most frustrating. Your goal is simple: escape from alien planet Alcibiade. The process, however, is an ordeal that will leave masochistic gamers chuckling with joy: in addition to the mundane tasks of hunting, you must deal with diseases that strike inexplicably and amputated limbs. The game claims to monitor over 100 variables from your temperature to malaria and poisoning, but thank god if you know *what* levels they are-- since you'll be seeing the death scenes so often in this game even real doctors will wince. If you value your sanity, do NOT play this game-- seriously-- go play the sequel Deus instead. 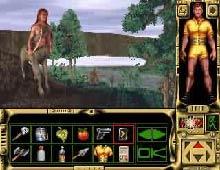