Correctly realizing that the "survival simulation" in its earlier fiasco Robinson's Requiem holds great potential but was fit only for suicidal gamers, Silmarils revamped the game engine, cranked down the difficulty level dramatically and put you back on the dreaded planet Alcibiade-- as a bounty hunter this time. Survivors from Robinson Requiem will soon find that the planet is MUCH more hospitable now, and it is actually possible to bandage and cure yourself of the various diseases. It's finally fun to play doctor/survivalist/hunter in the best Robinson Crusoe tradition. 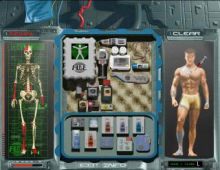