Back in the early nineties, before games were approved by committee, and when new and innovations were not only allowed, but encouraged, Blue Byte software, famed for its medieval resource-management game Settlers, and turn-based war-game series Battle Isle, suddenly began diversifying its games line-up with fantastically playable results. Out of this strange and mystifying decision came some of the best games of the time. One of the most engrossing and brilliantly executed of these was Archimedean Dynasty, a unique simulation of underwater combat. In the game, you play as Jake Gaston, an experienced, well-travelled and well-known mercenary who has had a recent run in with bad luck, as shown in the intro movie. While guarding a supply convoy of a rather dubious nature, he is attacked by a vastly superior foeâ?¦ One of his old girlfriends, in fact. After blowing up his ship and stealing the cargo, she is nice enough to pick up- well, it's either an escape pod or the remains of his cockpit, either way, you won't be getting second chances like this in the game proper. Anyway, she hauls you back to civilisation, which, regardless of just having had your ship blown out from under you, is something to be grateful for, considering that the bottom of the ocean is an environment only slightly less hostile than hard vacuum. Back at one of the undersea habitats, you are supplied with a new ship by your current employer, the slightly mysterious El Topo, and so begins your journey through the world of Aqua.

The game is set in the obligatory post nuclear-holocaust ravaged Earth, except these people seem to have had it a bit worse than most. After the war, not only was the entire surface of the Earth completely ravaged and nuclear winter set in, but a thick radioactive crust has settled over the surface of the oceans, trapping the survivors in underwater habitats with no way to ever return to the daylight.

The interface of Archimedean Dynasty is a simple one. You are presented with a screen showing one of the underwater habitats, with various locations highlighted with clickable text. Clicking on these will generally get you a location window with, hopefully, a few names you can talk to. These people will often have missions for you when approached in the right way, some will be people you have to meet, some will just be there for plot exposition and comic relief. But the most important of them are the people who you have to meet to get your paycheck.

As a mercenary, it is up to you to maintain your ship and weapons. As I mentioned, you start the game after a little run-in with bad-luck, and this continues when you find out that El Topo has also had some hard time lately and, well, basically you start the game piloting a bucket. There's no nice way of putting it, really. Before and after each mission, you'll want to find the local arms dealer who can sell you new guns, torpedoes, torpedo racks, various other goodies, and who can also repair your ship. This is where all of your hard-earned cash goes. Don't worry about buying new ships, this is handled for you at various stages of the game.

As a submarine-sim, Archimedean Dynasty does its job very well. The little one-man craft you pilot is brilliantly handled, with heavy turning and proper undersea handling (aquadynamics?) of speed and gravity. You use a sonar system and you therefore give off a certain amount of noise depending on the setup of your ship. There are a number of stealth missions in the game which depend on having a very quiet setup, and certain missiles will give a sonar, rather than a visual lock, and can be distracted by quiet ships firing loud "Noisemaker" torpedoes.

You'll find a good selection of enemies in Archimedean Dynasty, from fast, numerous scout-ships, to heavy bombers, which can rip your hull to shreds in mere seconds. There are also turrets and a few capital ships to defend againstâ?¦ and then there are the religious fanatics, and the Japanese, and then there is something else entirely :)

All in all, Archimedean Dynasty is an engrossing and beautiful game. You will truly come to feel for these people, as they struggle to keep their lives in order while facing deep-sea pirates, air shortages, deep-sea pressures and the occasional volcanic eruption. You will see the beauty of the simple things in life and you will visit the lowest and the very highest points of their society. You will know your own place in the great scheme of the civilisation of Aqua, but as a mercenary, you'll always be on the lookout for the next big payoff.

There are only two real criticisms I can level at the game: First of all, you don't take any damage from hitting the seabed. Not that I'm complaining about that, because torpedoes DO take damage from it, and I've had my life saved more than once after my decoys have run out by blindly heading for the ocean floor and hoping that the torpedoes will hit it before they hit me. It's just that, with all of the complicated physics going on in the background, it's a bit of an oversight to make.

The other problem is money. You're never really short enough to have to worry about it, but there are times when you have to make hard decisions about whether to get another missile or two, or to patch your hull back up. You really get the feeling that you're responsible for your ship. But at the end of the game, when you are very much in demand by the various sides, they reduce all prices to 1/10th of what they were and tell you to help yourself. Which means that you lose that aspect of the game right at the end. Again, it works well with the plot, so it's not a big problem, but it just makes the game lose a little of its edge.

All in all, I cannot recommend this game highly enough, especially if you still have a working 3dfx card, as there was eventually an updated graphics patch, which looked brilliant for its time. 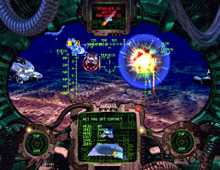