Without a doubt, Porrasturvat (Stair Dismount in English) was one of the most original freeware underdogs of 2002. But how do you code a sequel to a unique game whose purpose is to cause as much pain as possible to a hapless stickman falling down a flight of stairs? I bet nobody expected a sequel... so it was a pleasant surprise to see Rekkaturvat (Truck Dismount), a "sequel" from the same warped mind of Jetro Lauha.

If you love Porrasturvat (and who doesn't?), you should stop reading this review right now and just download the game. But for the skeptics among you that need some convincing, rest assured Rekkaturvat is a great game that is even more fun than the original - mostly because it gives you more parameters to tweak. Similar to Porrasturvat, your goal in the game is to cause as much pain as possible to a hapless guy... only this time you have more sinister props at your disposal: a huge truck, a pair of ramps, and a wall. You can change man's starting location, the speed of the truck, location (or absence) of ramps, and even whether or not you want the truck's front window. Once you press DISMOUNT, the cameras will start rolling, and the law of physics will take over as the man gets brutally slammed into the wall, crushed under the wheels, or even (if you are good enough) shot like a human cannon over the wall. Like in Porrasturvat, you gain points for every damage you inflict on the man - the more painful it is, the higher your score will be. Each body part that's being hurt will flash red, and different parts yield different number of points.

Needless to say, if you strongly believe that violence in games is a major cause of school shootings and other violent behaviors of today's adolescents, Rekkaturvat will disgust you to no end. But if you can take games for what it is: something we play to have fun, Rekkaturvat's unique and addictive gameplay (presented with tongue firmly in cheek) will keep you entertained... and make it a permanent resident on your hard drive. At least, until we see Plane Dismount or various more gruesome "Dismount" games that will hopefully follow. 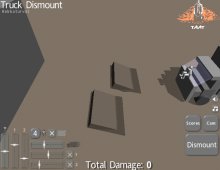