Winner of the game development competition in Assembly 2002 and deservedly so, Porrasturvat (Stair Dismount in English) is a quirky and strangely addictive little game by Jetro Lauha, the designer of caveflyer classic KOPS.

The idea is simple but weirdly cruel: fall down a flight of stairs and try to hurt yourself as much as possible. As to why you'd be hurting yourself, read the game's README file for info on the wacky premise (you are the superhero, no less - the plot will remind you of people who hurt themselves to claim insurance payment). All you do in the game is choose the location of body joint you want to fall first, and the angle you want it to fall. Then just apply as much or little force as you want by using the power bar (similar to swinging meter in golf games). Then you'll sit back and watch as your alter ego fall down the stairs in slow motion. Your "score" is the total amount of damage done to each body part (head, arm, leg, torso, etc.) after the fall. That's really all there is to the game, but like other addictive games, it will keep you glued to the screen as you try just one more push to inflict more damage. If you enjoy quick, quirky, and addictive coffee break games, Porrasturvat is a must-have.

Who doesn't want to push a person down the stairs? If you say no, you are lying. At least everyone has at least thought about it once. Porrasturvat is the game for people who just want to have a quick bit of fun, or want to relieve stress.

In the game, you pick a point of the body where you want the pushing force to occur. There is a "Power" meter to indicate the force you use to push the man down the staircase. As the man falls, he may hit his head/arms etc. on stairs, racking up "pain points". Your goal is to get as many pain points as possible. The graphics in the game are not too eye-catching. The stairway is in the middle of nowhere, and there isn't even any scenery. The man you push down the stairs is basically a 3D-stick man with a huge body. This is the main disappointment in the game.

The music isn't so great either. There is only one track, and get gets VERY repetitive, and can get very irritating. I would recommend turning your speakers off. Later there will be an "Online Score" list, which you can see other people's high score, and try to beat them. Online score list has not been implemented yet.

If you can stand repetitive music and quite horrible graphics, then this game should be quite fun. Playing in short bursts will extend replay value. 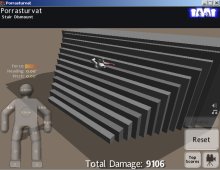