Precision Approach, as the name implies, is a very detailed simulation of aircraft landing-- in this case, a space shuttle. Despite this razor-thin focus, the game is surprisingly replayable for its random "reset points" (i.e. the starting point of each approach). Specifically, the game accurately models the portions of shuttle entry phases known as Terminal Area Energy Management, or TAEM, and Approach and Landing (A/L), with a staggering array of realistic panel instruments, gauges, and more acronyms that you ever want to know about a space shuttle. Thanks to its accurate flight dynamics, you can execute exotic maneuvers such as the speedbrake, and deal with crisis situations with NASA procedures such as "low energy," "high headwinds on the HAC," and more. Overall, Precision Approach is definitely a highly "niche" game that won't be everyone's cup of tea, and casual armchair pilots will probably find it too dry and boring. For anyone who knows what "derotation," "EOW," and "PAPI" mean, though, this is the closest you'll ever get to the actual NASA simulator. 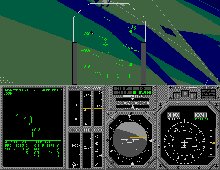