Shuttle is a vastly underrated and undersold simulation, probably because it is a "hard" SCI-FI game with a steep learning curve. This is the perfect game for would-be astronauts. It's a very realistic (and the only decent) simulation of the Space Shuttle. This one should not be approached by casual gamers, as this game is rock-hard. The flight model (well at least the atmospheric one) is very good, and it the glide test, the shuttle really handles like the enormous winged brick it is. I can't really comment on much of this game as I haven't been able to do everything it offers, but I can tell you what you'll have all the initial flight test of the shuttle, as well as a plethora of mission to accomplish. Avionics are very detailed, and you should get a proper manual to get to use this game effectively.

The manual accurately describes the launch and mission procedures, and unless you happen to work on the space shuttle program, you'll very likely need it. Graphics are very good for the time, sporting good old polygons in VGA resolution. Sound is somewhat limited, but decent.

This is a great game that has never really had a sequel (Microsoft Space Simulator lost itself in space), but one really needs to persist with it. Definitively recommended. 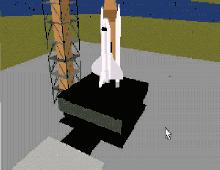