Pacific Islands is the follow-up to Team Yankee and as its name suggests is set in the Pacific Islands, where conflicts demand the intervention of the USA and you, as a crack tank commander. You are in complete control of 16 modern American tanks which are divided into 4 squads.

The interface is a step up from the confusing mess of Team Yankee. On the map screen, you click which team you want to command and click where on the map you want them to go. They then happily follow your orders without question, crashing through jungles and forests, sneaking behind cover, patrolling built-up areas, fording streams and even happily blundering into minefields. The objective in each mission is usually to take control of key areas, destroy enemy communications, escort support groups, etc. In a nice touch, missions may be undertaken at any time of the day; night missions surprisingly being the easiest, as the enemy has inferior Infrared imaging to your tanks'.

The graphics could be best described as 'functional', they certainly aren't to the standards of other war sims like Gunship 2000, but the functions are well laid out, simple and extremely easy to use. Same as in Team Yankee, much of the time you'll be looking at a screen divided into four, where each portion represents a first person perspective from a different vehicle.

Overall, Pacific Islands is an improvement over Team Yankee, although interface and dumb AI problems still remain. Once the initial problems of controlling 4 groups of 4 tanks are overcome, the rest of the game is quite easy to get into, and very rewarding. Recommended if you like tank sims, but don't expect it to be very realistic. 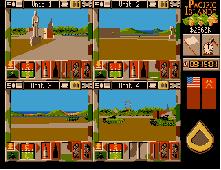