"Billed as a strategic-tactical simulation of the World War II Western Front, it was marginally adequate on the former level and an arcade rendition of the latter. Some interface inadequacies contributed to the "vanillaness" of this game, but with World War II-era tanks zooming around like race cars, one should take any relationship to history with a pillar of salt." -- M. Evan Brooks Home Page. Brooks trashes almost everything! ;) The game, in my opinion, is actually not that bad at all. It is certainly not designed to be a hard-core wargame, but an arcade-oriented simulation of World War II tanks. Okay, so maybe calling it even a simulation is farfetched, since tank handling is nowhere near the level of realism achieved in MicroProse's venerable M1 Tank Platoon. Still, the game is fun for a while, and certainly worth a look for action fans looking for World War II scenarios, and fans of designer Jonathan Griffith's earlier classic (and much more arcade-style) Conqueror. The PC conversion from original Commodore 64 was done by Chris Sawyer, of Transport Tycoon fame. If you like this average game, check out the even worse sequel called Campaign II on this site as well. 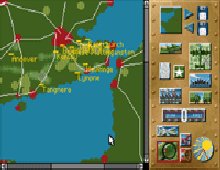