Cartel$ & Cutthroat$, aside from being master designer Dani Bunten's first game for the PC, is notable for being one of the first business sims in existence that remains almost two decades later as one of the best. 1-8 players compete for profit in this simulation of cut-throat competition that is a perfect by-the-book illustration of the basic tenets in finance and economics.

For starters, the game's manual is so well-written and comprehensive that you could read it as an introduction to economics without ever playing the game: it's chock full of simple-to-understand explanation of marginal costs, Consumer Price Index, financial statements, and more. Understanding these concepts is key to winning the game, which involving setting your production level and price where marginal costs equal marginal revenues, borrow funds when prime rates are low to expand, and minimize cost per unit. You must also pay careful attention to the state of the economy and consumers' tastes, both of which change constantly. If you're unsure of what to do, your advisor in the game will guide you in the right direction.

It is amazing that Dani was able to program this complex game entirely in BASICA. Cartel$ & Cutthroat$ is, at its worst, a challenging economic simulation that's equally educational and entertaining. At its best, it's an epitome of game design. Highly recommended. 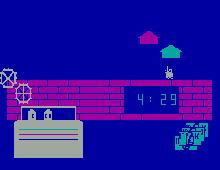