"Over the Reich (OtR) is a simulation of the air war over Europe late in WWII. But it's not your traditional joy-stick-driven flight simulator. The "sequel" to Big Time Software's Flight Commander II (which dealt with modern air combat), this game more closely resembles some of Avalon Hill's air combat board games (Dauntless springs to mind) than it does a traditional flight sim. Instead of piloting a single plane, you are in command of a group of planes. Instead of viewing the action from the cockpit, you view it from a top-down perspective. Instead of piloting the plane in real time, you can mull over possible "moves" before deciding what to do. In general, OtR places a premium on strategic and tactical thinking rather than reflexive reactions.

Each plane's flight characteristics are excellently-modeled (at least to the best of my understanding) which means that different tactics are required for different planes. For example, the Spitfire can turn circles around anything in the sky, so you will want to engage the enemy in an old-fashioned dogfight. But you'll need to keep an eye on your ammunitions levels (you don't have much) and make sure you don't take too many hits! On the other hand, the FW-190 has great speed, acceleration, and armament, but it doesn't turn very well. You'll have to use slashing attacks, then accelerate away from the target before turning for another run. Be sure to check out the extensive airplane database included in the game for plane specifications, strengths, weaknesses, and suggested tactics. You have to use planes according to their capabilities in order to win the game...

[OtR] is strangely addictive and I find myself loading it up with a surprising frequency for a quick 15-20 minutes worth of procrastination. The AI is wonderfully difficult (I can't stress this point enough) and there is quite a bit of fun and challenge in discovering the characteristics of a each aircraft and learning what tactics are required to win with each particular plane. But, ultimately, OtR is just too repetitive. The number of planes and types of planes may change, it may be a Tour of Duty, a Dogfight, or a Mission, but every battle is basically the same and at the end of the day I'm not sure how much longevity Over the Reich will have for all but the most dedicated fans." 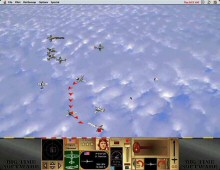 Over The Reich screenshot