Legendary Outrun, the arcade racing game that inspired many others such as Lotus Turbo Esprit. This is US Gold's conversion of the original game made by SEGA for the arcade machines that we used to see in the fun parks and such. Anyway, Outrun is a game of fast action driving. You and your girlfriend are in a big hurry for some reason and you need to complete more than a dozen of tracks filled with cars and strong curves. Beware, there is a timer for each track so don't make too many mistakes...

The alltime Classic-Racing-Game! It's just one thing: COOL! Why? Well, don't we all want to drive a sportscar way too fast? I love this game. It doesn't look that good, but well - this guy in the red car with his girl racin' against the clock and some mean other drivers (especially those purple ones are annoying). You might want to use MoSlo to play this, but it's also playable without - a bit more challenging though, kind of like racing on LSD ;) - No really it's a standard game noone should miss!

Another popular SEGA arcade game converted to the IBM-PC. This time it's SEGA's 1986 arcade hit OutRun, the classic bitmap racer. The original arcade game just rocks, so get yourself an emulator and play the real thing instead of this mediocre conversion. The graphics are awful, music is PC speaker only - but it's playable and can be quite some fun! Just don't compare it with the original. ;) But a short question to the related music files below: Is Jason Brooke actually David Whittaker? Their music sure sounds very similar. Fortunately the PC conversion of the sequel, Turbo OutRun, is much, much better. 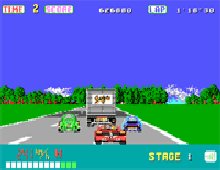