Turbo Outrun is a solid PC conversion of SEGA's arcade game of the same name, follow-up to OutRun. A much better conversion this time than its lackluster predecessor, Turbo Outrun very faithfully recreates the addictive arcade experience on your PC. Here is your chance to drive the famous Testarossa Ferrari F-40 with a voluptuous blonde on the front seat, racing against a guy who thinks he is cooler than you just because he drives a Porsche 959.

The cannonball-run race spans 16 cities of the United States, from New York to Los Angeles. Along the way, you will encounter different weather conditions (i.e. sun, rain, and snow), roadblocks (barrels, grease, etc.), and cops who try to run you off the road. To advance to the next stage, you must beat the clock. In contrast to OutRun, you can now upgrade your car similar to Street Rod games with components ranging from better engines, and super-turbo booster. You can toggle automatic transmission on and off, and even activate a special turbo boost that sends you into warp speed with flames coming out of your rear-exhaust. The only problem is that it makes your temperature gauge see red if you use it too much, and renders it inactive until your car has cooled down sufficiently.

Overall, Turbo Outrun is an excellent PC conversion of one of SEGA's best known arcade games. The graphics are good, and the car handles well. Although it lacks the variety of Street Rod 2, Turbo Outrun is a lot of fun while it lasts. 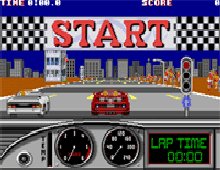 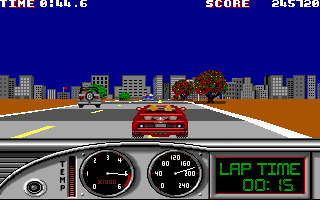