Out of the Sun

One of the most obscure flight simulators ever made, Out of the Sun is a competent World War 2 simulator from Domark, the second and last in its ambitious series of Macintosh-only sims that started with Flighting Nightmares (also on this site).

Like Flying Nightmares, Out of the Sun features very detailed reconstructions of the cockpits and a realistic flight model that can frustrate newcomers. Although the technical realism is still no match for the venerable Falcon 3.0, hard-core armchair pilots will find no cause for complaint with Out of the Sun. One of the game's best points is the staggering number of missions you can fly, spanning several WW2 campaigns including Midway, D-Day, and Kursk.

Although designed to be realistic, Out of the Sun doesn't leave beginners out in the cold. There are four different skill levels you can choose: Arcade, Training, Combat, and Veteran. The Arcade mode makes the game accessible to newbies, but also retains a good level of realism - no Afterburner / arcade-game-style shooting here. At the other end of the scale, the Veteran mode will give veterans plenty of challenge.

The graphics is a downside compared to PC flight sims at the same time - the terrain looks mostly flat, although the game makes up for it with plenty of nice effects, such as Gravity-Induced Loss of Consciousness, (G-L.O.C.). This option gives you the experience of having blackouts from too many G-forces: by making a quick dive or a vertical loop, the screen will change colors, or go black.

Despite subpar graphics, Out of the Sun is a challenging and fun flight sim that anyone from beginner to expert will enjoy. 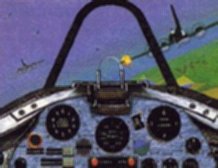 Out of the Sun screenshot