One of US Gold's most overlooked games, Operation Harrier is a fun top-down shooter that plays similar to EA's Jungle Strike: it's essentially an arcade-style game that puts you in control of a plane, shooting enemies below. Operation Harrier offers more depth and gameplay variety, however, because you have to pay attention to various flight-sim parameters including fuel, your altitude, and the nifty radar that shows where your enemies are. The graphics are better than average, as appropriate shadows and animation effects give a good illusion of 3D, even though the game is based on 2D sprites. Overall, if you enjoy a fun shooter that requires you to pay attention to more than just the trigger button, Operation Harrier is well worth a look. 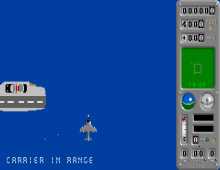 People who downloaded this game have also downloaded:
Operation Overlord, Longbow 2, Over The Reich, SEAL Team, Aces of The Deep