Mediocre naval simulation that is based on a unique viewpoint: defend the Persian Gulf in a Navy Cruiser. Despite this intriguing setting, Navcom 6 is disappointingly limited: there are only 3 missions in the game, and not a whole lot of gameplay options to satisfy armchair commanders. There simply isn't enough to do in the game to warrant its commercial status-- feels more like an unfinished simulation than anything else. If you want a realistic and complex simulation of naval warfare, RAW's Action Stations! or SimCan's Red Sky at Morning fits the bill much better than this game. Definitely one of the most forgettable releases from COSMI. Thumbs down on this one. 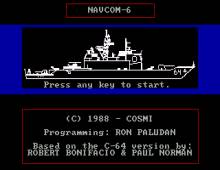