Games Domain says it all in their review of this ambitious but flawed tank combat game:

"Muzzle Velocity is indeed treading the same path as 1944: Across the Rhine, a fact which will worry more people than it reassures. The game features German, US and British units from D-Day to VE-Day and is set to allow tactical battles of around 20-30 vehicles and a couple of hundred men on each side. It runs in real-time (but you can pause to give orders), and you can jump into the boots of any soldier or (almost any) vehicle to fight in 3D action mode. The action mode has a strong "Wolfenstein" feel to it; the 3D model is certainly pre-Doom but the tanks themselves are nicely done and look quite authentic in shape. The problem with the 3D mode is, however, the same as 1944: Across the Rhine, you can only target things up to 380m away, beyond that you can just about see the odd moving pixel, and can fire at such ill-defined small blobs, but you won't hit much. Thus the effectiveness of the superior German weapons at range doesn't come into play, and the game again feels rather hollow.

The 3D game is supposedly the selling point for Muzzle Velocity. Despite the range restriction it is great fun to hop into the heat of battle and blast away at targets. Some of the up-close action gets very frenetic as tracers, shells, artillery and aircraft all whistle around. The modelling of weapons and armour penetration is apparently reasonably realistic, but there's too many features which are not. Tanks have turning circles that are way too tight and turret rotation seems too fast. Infantry carry an inordinate number of grenades and/or bazooka rounds. Artillery have no smoke ammo. Buildings collapse under one burst of MG fire. Planes can be shot down by coaxial MG fire. Engaging the enemy is often a bit of a joke - a red reticle highlights enemies rather like the Wing Commander targeting system, but it also picks out enemies hidden behind buildings or slopes. Worse, hitting things in 3D is too easy, especially armour firing main guns at infantry at 200m or more away.

Muzzle Velocity can, however, be played just from the tactical map, if you wish. Coordinating units isn't too hard as you can set waypoints and attack orders quite freely. You can even tell units to move by road only. You can zoom right in and give individual men or vehicles orders, or you can let the AI do the dirty work for you (which it also will if you are of low rank). The only snag is if you jump from 3D to tactical and back to 3D the vehicle you're in will be stopped, and getting your speed up again each time is a pain. That of course, and the fact that tanks can engage beyond 380m in tactical mode but can't see each other in 3D...

The game features a variety of single battles, with tutorial missions, and also has a campaign system. In the campaign you start out as a lowly corporal with very little control over the tactics and as you work your way through the ranks with successful battles you gain more power and command ability. Promotion comes quickly on the American side; I had 4 promotions in successive battles and was soon a Captain. As you progress, you get assigned leaders under your command, but I found they seemed to die quite quickly(!). On the German side things are much harder, and just winning battles is a struggle in itself. The battles are not short affairs, and can take 30-60 minutes to play, even using time compression in the lulls. However, you can save or load at any time.

Muzzle Velocity is in many ways an ambitious game, and a game which if done really well would be a big seller. Unfortunately while it has some bent to realism in weaponry effectiveness and external vehicle appearance it also has way too much of an arcade feel to it in the 3D mode. Played as a 2D tactical game it is OK, a passable game, but it's not on a par with Close Combat where every man is very accurately modeled in terms of capabilities, actions and morale.

On the other hand, for the street price of $22 or so Muzzle Velocity is a fun "shooter" with a good level of detail for WWII fans to get their teeth into. The action can get very tense at times, and the AI can give you a good run for your money (especially if you play as the old game Germans). Grognards really should stay well away, but for some light entertainment casual gamers could do a lot worse." 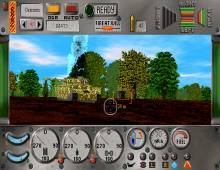