Ka-50 Hokum is a unique and probably the least known flight sim from Simis, makers of Flight Sim Toolkit. This game gives you a base ship with a few helicopters and their armament with which to wage your war. Although the game is called Hokum, you can actually fly a other helicopters, too, including the Cobra and Lynx.

Your life in this game revolves around your base ship with its powerful map/mission editor. You can plot the course of your base ship and schedule missions for your helicopters. At the beginning of the game you may want to send a helicopter to on a recce mission to find targets. Once found, you can schedule another mission to take them out. Once you have a mission scheduled, you fly them using the available helicopter. During your mission, you can also switch back to your base-ship to schedule new mission or to review the map. The gameplay is surprisingly deep. Perhaps too deep for people who just want to fly and shoot things.

Graphically, Hokum is also impressive for its era. The graphics surprisingly delivers the atmosphere of operating in the tropical area with its lush green islands, white sand beaches and blue sea. The sound is also very atmospheric. For such an old game, the flight modelling is also very good. Trying to fly your chopper in a ham-fisted way will get you into an early grave. Thankfully, the game gives 2 options for the flight model.

Whether you are a helicopter sim fan or not, you might want to check Hokum out. At the very least, this will give you a chance to take a look at this rare gem. And, you might even like it. 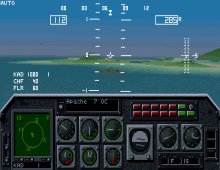