MiG. The name instills images of ruggedly built, ugly aircraft with limited range and payload but with great maneuverability. Well, that maybe true if we're talking about 50's or 60's MiGs. But just look at the graceful lines of MiG-29, and you might retract that judgement. MiG-29 is one of the best fighter in the world. Tasked with close-in dogfights and ground attack like it's American counterpart, the F-16, this fighter complements it's larger interceptor sibling, the Su-27. Codenamed Fulcrum by NATO, this aircraft is also one of the most maneuverable fighter of its generation.

MiG-29, the game, is one of the first attempts to model Soviet-built fighters in PC. And the designer have successfully made a mixed-bag product. The flight modelling itself is okay, for a sim from its era. Small realistic touches, like using metric measurements instead of English, is a plus (even Spectrum Holobyte did not use metric measurements in their MiG-29 game for gameplay reasons). Weapons modelling is also sufficiently convincing. The graphics engine, provided by Domark, closely resembles the low-res version of its Flight Sim Toolkit. The manual, like manuals of that time, goes beyond the call of duty in providing information on how to play the game and background information of the plane itself.

The downside of this sim is the limited missions supplied with it (you won't run out of fingers counting them). The missions themselves are quite interesting, mind you. In addition, the designers seemed to have decided to further insult our intelligence by using "Cyrillic-like" characters in the menu screen which is not only not cyrillic, but also downright ugly.

MiG-29 is an interesting game for memory's sake. However, if you really want to fly a simulated Fulcrum, you'd better pick up the aforementioned Spectrum Holobyte's MiG-29. Or wait until Flanker 2.5 is released... 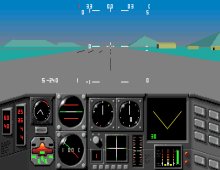