Perhaps the world's only first-person train driving simulation ever made until Microsoft's Train Simulator and the superb simulator from Japan called BVE, Mechanik is a reasonably realistic sim made by a group of Polish programmers with a passion for trains. The game lets you play the role of a train conductor, driving a modern-day train from the first-person perspective, on tracks that crisscross rustic scenery. The controls are simplified, and driving the train doesn't feel very different from driving, say, a big truck (except you change gear a lot more often, and brake really means brake). But you still have to keep the train on the track (duh) and watch out for obstacles.

You're given a score based on how well you drive, but with only one train and repetitive scenery, Mechanik lacks long-term play value that would have made it a much better game. Worth a try for all fans of miniature railroad, just for the novelty of it. 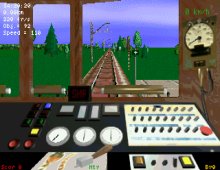