Well, this is a 1990 game sporting some really interesting concepts. Player of Su-25 Sthurmovik will feel right at home as the menu system is the same. The VGA graphics are nice, very clear, even though there?s a little warping with polygonal terrain features. Sound support includes Sound Blaster, so it?s not bad. While this game?s flight mode is hardly realistic, the game has one thing for it - its sheer fun.

It?s far better than the arcadish Comanche (by Novalogic). You can fly in a LHX (future helicopter) an Apache, a Blackhawk and an Osprey. All fly differently, being the LHX a nifty little bugger, very fast and agile, as well as armed to the back teeth, the Apache being slower and thougher, but even better armed (even though it sports an analog cockpit), the Blackhawk being a workhorse, but an armed one, as well as tough to crack as a nut, and really necessary for the rescue and supply missions, and the Osprey, an aircraft-helicopter hybrid (now in service) that takes off like a chopper and then flies like an aircraft. Weapons are varied, and there?s great fun to be had by steering TOW missiles right down the enemy?s throat. Speaking of which, the enemy aren?t too dumb. Missiles and AAA will engage you ASAP, and so will tanks. While enemy helicopters won?t pose much of a danger (unless they are Havocs or Hokums), enemy jets will.

Missions are very varied, ranging from armed recon to deep strike, escort, extraction/deployment, etc? This is a game that EVERYONE with a even passive interest in helicopters must have. 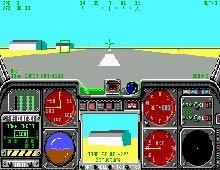