One of the earliest flight sims known to man is this Sublogic game with an awe-inspiring title G. Jet allowed you to fly an F-16 and an F/A-18, and you could fly off of a carrier. Although very primitive by today's standards, the game was revolutionary for its time, with as much real-world physics as would fit on a single 5.25" 360KB disk. The Commodore 64 version, naturally, was superior to PC version due to a much more extensive color palette than 4-color CGA. Developed by Charles Guy using Bruce Artwick's technology, Jet has the interesting feature of being able to run Scenery Disks developed for Microsof'ts Flight Simulator. When the game was released, it was the be-all and end-all at the time, with some ground-breaking elements, like remote views, guided missiles, etc. For those who want where flight sims come from : this is their great-grandfather :) Note: Below, you can download a zip that includes a number of scenery disks from subLOGIC and Mallard. These include SD-1, SD-2, SD-3, SD-4, SD-5, SD-6, SD-7, SD-9, SD-11, SD-12, SD-HAW, MS-1 (Hawaii), MS-2 (Tahiti), and MS-4 (Japan). These scenario files can be used in Microsoft Flight Simulator 2.12, 3.0, and 4.0, as well as subLOGIC's JET, Flight Assignment: ATP, and Thunder Chopper. 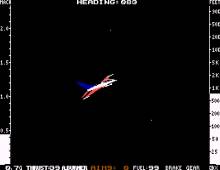 People who downloaded this game have also downloaded:
Defcon 5, Car Builder, Aces of The Deep, Elite Plus, SEAL Team