Harrier Combat Simulator is a thoroughly average Harrier flight sim that doesn't come even close to giving Harrier Jump Jet a run for its money. A revised version of Mirrorsoft's 1986 High Roller, the game simply boasts better graphics but leaves all the problems intact from the previous game. The graphical environment is very restrictive (the "edge of the world" is incredibly close-just try to fly straight for 4-5 minutes or so), and the control mechanics are very clumsy, requiring you to memorize a lot of keystrokes. Aerodynamics laws are all but absent-and the relatively old age isn't even a good excuse given how reasonably realistic early sims like Falcon and F-15 Strike Eagle are. Thumbs down for this old game. 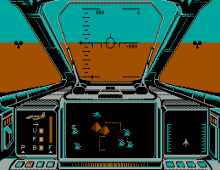