From Glyn Williams, co-founder of Particle Systems comes Evasive Action, an innovative combat flight simulator featuring dogfights with planes from as early as 1917 up to the future of space combat of 2064. Overall Evasive Action is a fun and easy multi-player air-combat game - more an arcade-style action game instead of a flight simulator. Bugs, inconsistencies, and some gameplay quirks makes the game feel as if it can't decide whether to be an arcade shooter or a realistic flight sim. A diamond in the rough, but still a diamond nevertheless. Worth a try for anyone who's interested in expansive flight sims with original premise.

Glyn Williams offers an interesting history of the game (with very humble words) from the designer's perspective on his website: "I had a 3D engine on the PC and needed to do something with it. I had read a short story called "Dogfight" by William Gibson, and my first instinct was to do a game based on WW1 fighter combat. Before I had gotten very far the world was filled with WW1 fighter sims and the simulation market was turning towards highly technical and accurate simulation. I wanted to do something far more gamelike - a deathmatch in the air. Evasive Action featured air-combat and air-racing, in 4 different time periods. It was very gamey, featuring shoot-triggered, and stunt-triggered power-ups. It was also multi-player allowing split screen and modem link ups (working at a blistering 1200 bits per second). It was also way too ambitious and way-too complex for one guy working alone, especially coding in assembler. By the time it was done, the technology was looking long in the tooth - and the release version was way too buggy. Not pleased with this one." 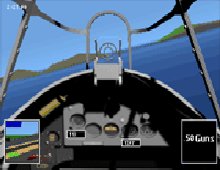