F-14 Tomcat is a fun early flight-sim by Dynamix. Despite the name, the game is actually an arcade game with some simulation elements. This means that the game is much closer to, say, Apache Strike than Falcon 3.0 in spirit. True to Dynamix' reputation, the game has excellent graphics, intuitive controls, and plenty of atmosphere. If you like arcade-ish sims such as Strike Commander, definintely give this one a try. Not much to speak of in terms of long-term play value, but it is a lot of fun while it lasts. 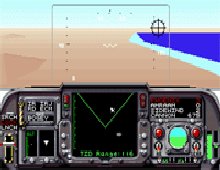