Birds of Prey is a fairly complex combat flight simulator by Argonaut Software, featuring a lot of different planes and missions. The Amiga version contained a breathtaking intro that is sadly completely missing in the PC version of the game. The PC conversion was done by Chris Sawyer of Transport Tycoon fame. Here's a more in-depth look at the game from a review at Amiga Games Database: "What [Birds of Prey] did involve was just about every jet the US and USSR had at the time, with C130 Hercules transports and the X rockets the US used to run supersonic tests on. Surprisingly, although perhaps not given their involvement with Armour Geddon, this was a Psygnosis effort.

Birds of Prey was definitely one for the aircraft fancier. You could pick a mission to suit and get into the cockpit of just about anything going, for either side. Handling was appropriate in pretty much all cases and the 3D engine suitably slick. You could mount attacks on ships, factories, and tank batallions. You could drop supplies from your Hercules, or strafe an area with the A-10's big gun. This was also the first Sim I'd encountered in which you could actually refuel in mid air.

Unfortunately there was a price to pay for having all these planes and the touches like mid-air refuels. And that price was the map. Or the lack of it. No Middle East scenarios, no European scenarios, just the one map, with the good guy side and the bad guy side, and that was it. So although you did have quite a few toys to play with, the sand box wasn't very big or varied. Which is a pity, because otherwise Birds of Prey was a very competent Sim. It just wasn't one I'd recommend to, for example, ThunderHawk fans who were used to evolving storylines and varied terrain types." Still a Top Dog, regardless :)

Note: The answer for the copy-protection question is shown on-screen in brackets. 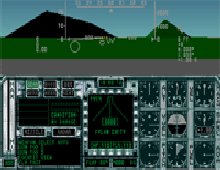 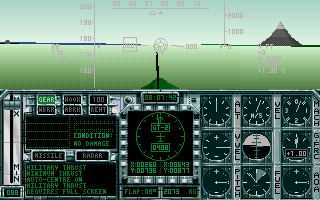