EGA Trek - a completely cool clone of a very early Star Trek game, but better than any of the Star Trek games I've ever tried (which is near to about 0 or 2, so that might not say much). But yes, this was and continues to be a great game, I played it for years when it came out. Admittedly when you look at it and have a go you might get put off, but once you get the hang of it and start to really get into it, you'll find you get hooked.

Basically there are evil Mongols in the galaxy, and your job is to travel around the sectors and exterminate the lot. The Mongols pose a threat to the Union (yeah a take off of that wonderful phenomenon that we call Star Trek). Yeah it sounds rather fun and easy, but it's not that easy. There are many complications that come with exterminating Mongols ;).

You are a pretty little yellow ship, and you can see yourself on the lovely blue grid. The Mongol ships are blue, green or red or a variety of colours really, the different colours sybmolise different ships that would therefore have different strengths. There are Mongol bases you can find, and it's a good idea to kill these, as it will prevent more Mongols threatening your existence. Also in addition to Mongols, there are Vandals. They fly around in very cool looking ships, but you also want to kill them, because they are evil too ;)

There are also really cool things in the galaxy of sectors though, like planets and friendly ships and space bases, where you can repair and restock your supplies and your fuel - you do not want to run out of fuel while saving the galaxy! (I'm getting Tradewars déja vu). There are stars, but beware the novas and black holes. The friendly bases or ships might send out distress calls, which you can go and save them and be the hero.

I managed to save the galaxy on the first three difficulty settings, but there are five. And they get VERY hard - trust me. I give this game a 10/10 for addiction, I honestly played it for years and its great to have it again!

EGA Treks is one of the best "clones" of the popular Trek space combat simulation game in late 1970s/early 1980s. The excellent review at Classicgaming.com says it all:

"As the EGA Trek documentation explains, EGA Trek is actually a remake of one of the earliest video games (or earliest Star Trek games, anyway), so old that in its original minicomputer form it apparently wasn't uncommon to receive all the program's output through a printer. The Federation is being invaded by the Klingons and the Romulans ? or rather, the Union is being invaded by the Mongols and the Vandals. (I suppose copyright lawsuits have always been around.) Naturally, it's up to you and you alone (almost) to kick butt and eradicate every Mongol you can find in 64 sectors. And even more naturally, it's not as easy as it sounds.

All of the Star Trek standards are here (albeit with different names): phasers, photon torpedoes, warp drive, various kinds of space stations, planets with dilithium mines, black holes, distress calls, death rays, view screens... Truly, once you figure out how to get around (and since the interface is reeeal old-fashioned, you might actually have to look at the help screen or even ? gasp! ? the manual), the most fun you can have is just figuring out how everything works and finding the most efficient way to dispense of the Mongol fleet.

You have a limited amount of energy to power all systems, including the lasers, which are prone to overheating, but are still the best way to blast things. Entorps take much less energy, but you can't carry many of them, and they're hard to aim, especially if a black hole is in the way, but they're all useless anyway if all your torpedo tubes are nonfunctioning. You can always shoot one at a nearby star and hope that the resulting explosion will remedy your woes, or even blow you halfway across the galaxy, but destroyed stars cost you points at the end of the mission. If you capture a Mongol supply station, you might have a plasma bolt or two to chuck at your enemy, provided you're far enough outside of the blast radius to remain unaffected. If all else fails, you can try that experimental Death Ray, which might destroy every ship in the immediate vicinity, or blow you up, or cause mutant crew members to draw funny faces on the viewscreen...

And that's just for starters. To say more would just give too much away. But you can be sure that you'll have to figure out a thing or two in order to survive on the Admiral difficulty level, where nasty varieties of Mongols are everywhere, everyone is sending out distress calls, and ship systems fail at a rate that would probably make Kirk throw Scotty in the brig just to make him shut up. Oh, and reinforcements keep pouring in.

EGA Trek really is a fine little game, and it will keep you busy for a time as you race around the galaxy trying to survive or even get a high score. Of course, after blowing away fleet after fleet of Mongol ships, you might begin to feel like Picard in "Conundrum," blasting away at defenseless Lysians... or something."

Some Star Trek game where you have to kill all Klingons. You can explore different sectors in space, each with there own planets, enemies and friends. 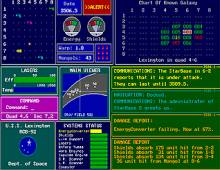 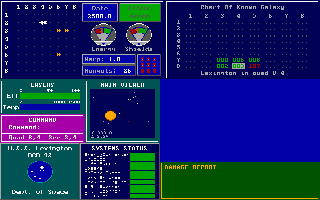