Trixter's review at MobyGames says it all about this lackluster racing game:

A major disappointment in the history of the series.

The premise is sound; you are on the run from the cops and have to navigate the best way to the state line. You have a map to help you choose the best route; it's arcade racing with a sprinkle of strategy.

Several major oversights hinder gameplay drastically. Objects pop up quicker than any human can react to them because the field of depth is so short... But the main problem is the control mechanism. You simplay cannot turn left or right fast enough to avoid obstacles and turns. Most computer arcade racing games offer unrealistic handling in comparison to real life, but CC2 is the only game I know of where the handling is severely degraded compared to real life.

There's no reason to waste time with this one; it's almost as if gameplay was added as an afterthought." Your best bet is to skip this disappointing old game and play the superior sequel Crazy Cars 3 (a.k.a. Lamborghini: American Challenge in the USA) instead.

You're busted for speeding! Race for the state line in a Ferrari F40 to avoid the cops and evade capture. Use your map to plot the best course. 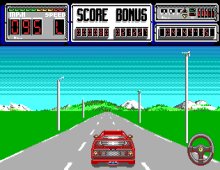