The pioneer of Space trading/combat simulation genre. Many other titles were inspired by the original Elite but neither of them reached the glory of the mother of them all! Elite puts You in a role of starship commander (a small starship). You can choose to be whatever You want - a trader, mercenary, pirate, all of the above! Trade goods and earn money slowly or seek and destroy other ships. As you earn ranks You'll be offered some missions to finally reach the ultimate rank - ELITE. Very hard and very entertaining.

This game was the first of its kind. Forget about a simple 2-d affair where one guides their sprite to safety or aliens must be blasted only to be replaced by another wave until you expire. Ambitious by design, Elite won itself numerous fans throughout the 80's by allowing the player to explore the universe in 3-dimensions. Yes, so the graphics were only wire frame vectors but they did the job.

Trading is a big part of life in Elite. Lucrative gains can be made by dealing in illegal good and profit is plentiful on feudal worlds if you can get to the space station alive. Pirates wait in groups and will do everything they can to relieve you of your cargo. Speaking of pirating, you can also try your own hand at it but don't expect the police to turn a blind eye.

In this game your legal status is important, though not as imperative as your ranking system. You start out as harmless and after a few kills become known as mostly harmless right through until you reach Elite. The first thing you'll need is a docking computer. After that it's a good idea to upgrade the ship - in particular your weapons. Missions crop up every now and then but sadly not often enough. The action can wear thin but the ranking system keeps you interested. Often imitated but yet to be bettered Elite remains one of the most memorable games ever coded.

If you've got the time, patience and imagination, strap yourself into the pilot's seat, take an ample supply of food and water and enjoy yourself.

This is the game that started it all - Elite became a cult-classic and no Sci-Fi-Fan should miss it. That trading/fighting-concept was a really great idea back then. Millions of players still try their best to become Elite - which means you are highly respected and more than dangerous to everyone stupid enough to attack you.

I must admit that I never really got into this one - I am more a fan of its sequel Frontier. But the reason could simply be that I got that one some years before Elite. Anyway, you might miss one of the best games in gaming-history if you don't even have a look at it. The only difference between Elite and Elite+ (also up at our site) are the better graphics of the 2nd one. It's a remake of the original game and FAR better. I recommend you play that version, but for all you nostalgic freaks out there (and those who want to run it on their old 286) I also added the first version of David Braben and Ian Bell's innovative game - it's at least a great example of very intelligent programming-techniques, just look at the size of the game and compare it to the huge universe you are able to explore!

Here it is-- the game that started a whole new genre of space trading games. Elite gives you complete freedom to find fame and fortune in a vast universe, as a space mercenary. It is difficult to find fault with Elite: from the amazing flight model to the intuitive interface, revolutionary graphics (for its time), great variety of ships, and many other novel ideas, Elite is a true classic.

Beside revolutionary 3D engine for its time, Elite also boasts a huge universe to explore with many random elements to ensure virtually unlimited replayability. Trade various cargoes, salvage enemy ships, and take on increasingly difficult missions as a mercenary for hire. Ian Bell has recently released the game into the public domain, so go to his site right now for the game and other assorted goodies.

'Command your Cobra spaceship in a fantastic voyage of discovery and adventure, a supreme test of your combat, navigational and entrepreneurial skills. Trade between countless planets, using the proceeds to equip your ship with heat-seeking missiles, beam lasers and other weapons - corporate states can be approached without risk, but unruly anarchies may be swarming with space pirates.

Black market trading can be lucrative but could result in skirmishes with local police and a price on your head! However you make your money, by fair means or foul, you must blast onwards through space annihilating pirate ships and hostile aliens as you strive to earn your reputation as one of the Elite!'

Elite is quite possibly the best game ever created, a masterpiece of design and gameplay. While the game is immense (remember that word!) the concept is simple: you are a freelance space pilot... that's it! The game has 8 galaxies to explore, each containing approximately 500 unique planets. You can be a choose to be a trader and ferry goods between worlds, or a pirate who attacks ships and takes their cargo. Or a bounty hunter, or an asteroid miner or... you get the idea ;) Earn money, upgrade your ship, undertake missions, maybe even go after the evil Thargoids (the big bad aliens in the game). What you do is entirely up to you.

This game truly is a classic. 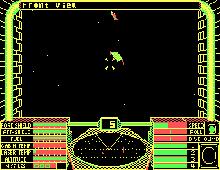