Another fantastic game from SSI. All though this not the usual game type SSI works on but yet a very special game. But you can also see the influence Westwood has had in the developments. All though this doesn't make the game worst as SSI and Westwood had a glorious period in the beginning of the 90's with games like the Beholder series (Eye Of The Beholder 1, 2 & 3) a this game.

The control is just like a normal flight simulation but instead of a flight and a canon you have control of a dragon, are equipped with a lance and your dragon can breath fire as well. You start the game as a young knight and you are pulled into the dragon battles where you just have to survive. After each mission is completed a small story will follow and you will get better weapons, a better dragon, magic items and more experience points.

A Dragon-Flight-Sim? Yeah, I know what you think - this CAN'T be fun! So thought I - but then I tried it. And YES - it IS fun. Some RPG-Elements mixed with a pretty good flight-interface. O.K., the inflight-graphic's not up to par, but what do you expect of a game that's made to be played on a 286 (officially it should also run on an XT)?! You can defeat your enemies with your dragon's breath or your Lance. In the course of the game you will be able to upgrade your equipment and to get stronger a dragon. Background for this unusual game is the War of the Lance - you might know of it from the Krynn-Series. Overall a VERY unique game and surprisingly playble!

And don't forget, that your dragon is a living creature, meaning there are physical limits, sometimes it just needs to rest - and that might not only occur at suitable places and times.

Another excellent, largely unknown game from Westwood, this unique game is essentially a 3D (yes, 3D) dragon flight simulation: fight through progressively harder missions on dragonback, downing enemies with your dragon's deadly flames while avoiding theirs. Definitely fantasy flight sim at its best. And unique, to boot ;) 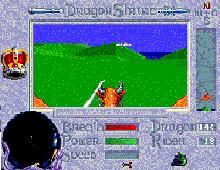 People who downloaded this game have also downloaded:
Elite Plus, War of the Lance, El-Fish, Wing Commander: Privateer