Police racing? In San Francisco? Wow, what a weird idea! But it works, as this is one fine racing game. You can select to drive either the old or a new model of a police car then race 7 opponents and the clock in the same time. The first few sections of the race are pretty easy but things get nasty later. I did manage to complete the game anyway so it's not that hard.

Note: the game might not work on most new machines and you will have to slow them down a bit.

It's time for the annual police race through the streets of San Francisco. Cisco Heat is a dead average racing game in which you must beat the clock and reach the next checkpoint in time. You've also got to avoid trams and cars which might block your way. However, this is almost impossible to do, since the collision detection is truly abysmal-- you often find yourself colliding into invisible police cars and trams that are on the other side of the road. As a result, you will often run out of time and can't reach the next stage. A good effort at recreating a semi-popular arcade game that didn't quite work out. Steer clear of this game, unless you consider yourself a die-hard racer who must play every racing game ever made.

This one is a very basic racing game. But I'm sure you will not agree on this when you've played it. It's not just pushing forward and steering every once in a while, no, in fact this was the first racing game I played where it was really important to slow down before you got to some points and turns.

Though, it's still a rather simple game, which actually means "fun". Children can play this game over and over again and not get bored. You race against 7 opponents, the police and the clock, which makes this game hard, but playable and tempting to restart.

I'm not saying this game was really ahead of its time, but Cisco Heat caught me playing alot when I was still a little DarKsiDe. While it can't match up with most of the racing games you see nowadays, I recommend you try this one.

A police racing game. You can drive in different carmodels of the police. The game looks a bit like outrun, but that won't you stand in the way for this great race game. You probably noticed that the setting of the game in in San Fransisco, hence the name Cisco. 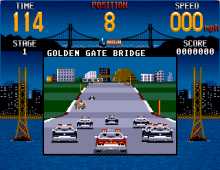 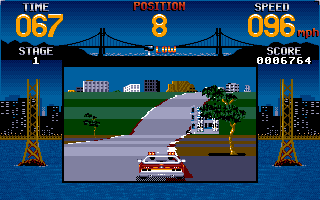