The word "Command" in the name is a definite misnomer, given that Battle Command is nothing more than a glorified arcade game set in a tank. The 12 missions you will need to undertake are all very repetitive-- most of them are nothing but long, slugging matches where you face seemingly endless hoards of enemy tanks and helicopters. Despite some variety in mission objectives and weapons you can choose, most of the missions are very similar. In short, this is a very disappointing sequel to the classic game, despite better graphics and sound. I strongly suggest you play Carrier Command instead if you don't know what it is. 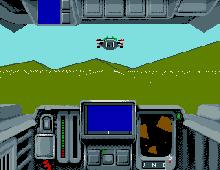 People who downloaded this game have also downloaded:
Carrier Command, Aces of The Deep, Birds of Prey, A-10 Tank Killer v1.5, 688 Attack Sub