A solid 3D-Simulation from 1987 - who would have expected that? And this really means 3D - you can rotate 360 degrees more or less freely - until you hit a building and crash of course. Unfortunately that's something that happens quite often. It's not an easy job to maneuver through that labyrinth of buildings, but with a little training it is possible. I must say that the technical aspects are really interesting - it's still the 80s and it's still CGA - you got to remember that. The game itself isn't more than a mediocre shooting game. Well, not bad - but I've seen better ones. Might be fun for people who love this genre.

Despite the name, Apache Strike is not a realistic simulation of Apache helicopter, but a straightforward first-person shooter. Your goal in this Rebel Assault precursor is simple: shoot the aliens that are (what else) invading the Earth. Although you view the action from the cockpit, you don?t actually control the plane?the buildings zoom past you; your only job is to shoot every menacing aliens that comes up while dodging other helicopters and wall. Gameplay is fun once you get used to the lack of freedom in copter movement, but gets repetitive quite quickly after the novelty and pizzazz of 256-color graphics (rare for its time) wear off. Rebel Assault fans may find this fun, but gamers looking for a less restrictive and more varied sci-fi shooters should play Konami?s Killing Cloud instead, among other candidates. 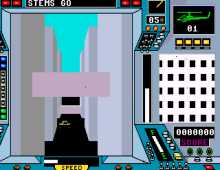