Action in The North Atlantic

One of General Quarters' best games, Action in The North Atlantic is a fun and accessible naval simulation set in the World War II. The game focuses on only a single battle: the Murmansk run in World War 2, where your objective as British naval commander is to sink the German's formidable Scharnhorst, or survive the British onslaught as the German commander.

There are many starting options that affect the length and difficulty of the game. You can choose whether to play on the tactical or strategic level, control the British or German navy, and the number of turns (for tactical level) or days (for strategic level) before the game terminates. If you choose to play on a tactical level, you will command a single battleship, complete with a realistic radar screen and ship characteristics. You can make smoke, train and fire guns, as well as disengage from battle, or even scuttle the ship if the probability of losing is too great. Graphics, being CGA only, is more than adequate for the game's focus on realism. One nice touch is that any shot you fire is animated on the screen, and leaves a visible hole in the enemy's ship upon impact. You can therefore gauge the damage level of enemy ships by looking at the size and number of holes in their hulls. Unfortunately, this also applies to YOUR ship, and maneuvering becomes key to success, especially if you are controlling the Scharnhorst on the German side, which is greatly outnumbered by numerous British warships. After the battle is over or the maximum number of turns is reached, battle outcome is displayed with vital statistics, which can be printed as a hardcopy (I doubt any modern printer would make this feature work anymore, though).

The game's strategic command mode, in contrast to the tactical mode, places you in charge of the entire fleet. In addition to plotting courses for various ships in your fleet, you can also call in air attack, perform an aerial reconnaissance, and utilize submarines. As with any other good strategic-level wargame, astute planning and good timing is key to your mission's success. With two very different gameplay modes, solid computer AI, a good balance between realism and playability, and a user-friendly interface, Action in The North Atlantic is a fun "beer-and-pretzel" naval simulation that's worth a play-through for all armchair commanders. 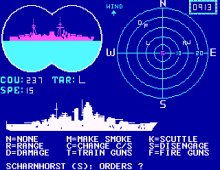 Action in The North Atlantic screenshot