Zeliard is, at first appearance, a standard early game. It has blocky graphics, grating music, and the manual that comes supplied with the boxed version is little more than a folded piece of cardboard.

However, once you've skipped past the ntroduction (princess stands on balcony, princess is turned to stone by evil demon, random heroic knight is sent to slay the demon and find a way to cure the princess) and into the game proper, you'll find that Zeliard offers dungeon hacking and slashing to the point where you'll want to stay awake to fight the next boss.

Zeliard is primarily an action game. The roleplaying element is small--your hero, Duke Garland, has a health bar, a weapon, and a shield, nothing else. Your experience points are not displayed but you can gain in power by visiting various Sages after slaying moderate amounts of the slobbering dead. The controls are simple. Left and right movement, jumping and ducking, various stabs and swings with your sword. There's a limited selection of spells which are, effectively, your ranged attack.

However, Zeliard has a range of NPCs it uses to flesh out the story, and give your dark foe some personality. It seems that there are many towns spread throughout the caverns and across the mountains, and each has been tainted by the foul demon, who has posted monsters of a large and unfriendly sort to act as a guardian and reap havoc. Each guardian has a magic crystal. Garland needs to collect all these crystals to win the game and save the girl.

The range of monsters is diverse. The levels are exotic and numerous, divided into seperate caverns and filled with traps and pitfalls. There are plenty of puzzles, magical artifacts (boots and cloaks) that perform different effects, potions and items hiddens in walls and mini-quests to complete. You can collect gold from chests and gain almas, glowing crystal balls, by slaying monsters; these almas are converted into gold at different exchange rates by the various towns. You'll eventually be able to afford better swords for added damage, better shields for protection, and magical items to boost your skills.

For such an old game, Zeliard boasts great atmosphere. Standing outside the boss doors, you can hear the thumping and clamour of the hideous leviathan inside. The bosses are varied, from giant leaping crabs, to dragons, to gigantic blobs of ooze. Each is difficult and there is a real sense of achievement from having beaten them.

Zeliard is not an easy game! Defeating it takes quick reflexes, a good memory, and the ability to perservere. As a hack and slash treat to challenge your senses there are few games finer. The download for Zeliard is easily worth it, and even if you don't like the game, stick with it. Once you've killed the first boss and gained your first spell, you might want to keep playing, just to see what happens next.

Amidst the flurry of imported games that resulted from Sierra's deal with Japanese publisher Gamearts are Sorcerian and Zeliard, two quirky action/RPG titles with strong "console" feel. Definitely "light" games in that there is few statistics (although characters do gain levels), and the arcade-style platform action may not be every RPGer's cup of tea. Still, interesting plots, spells, and lots of "secrets" make these games above average despite chunky graphics.

Although both games are RPG with heavy arcade elements, Sorcerian has a stronger RPG flavor because you get to control a four-character party, comprising the traditional retinue of priest, fighter, and wizard, each of whom have access to unique weapons and/or spells. Zeliard, on the other hand, is a solo-player RPG with much less emphasis on character development than nonstop platform action. 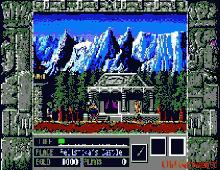 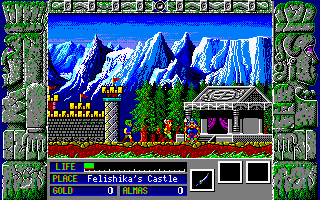