Zangband is the excellent but now-discontinued graphical facelift of Zangband, arguably the most popular Angband variant today. Short for Zelazny Angband, Zangband has many more features than most (if not all) other Roguelike game, and is frequently updated by the developer team.

Since ZangbandTK is essentially Zangband with a user-friendly interface and crisp 16-bit tile graphics slapped on, I'll just review Zangband. Originally created by Topi Ylinen in 1994, the game features creatures, objects, and powers from Roger Zelazny's popular Amber fantasy novels. But the fun doesn't stop there - over the years, Zangband is continually being updated to include hundreds of new and often funny monsters which don't have anything to do with Zelazny or Tolkien (on which Angband was based), including Barney the dinosaur and Santa Claus (!). There are dozens of classes to choose from, each with its own strengths and limitations (a spectre, for example, can fly through walls, and a vampire can drain life from monsters but is vulnerable to sunlight). The game includes 7 realms of magic, hundreds of magical artifacts, pets that help you fight monsters, superior monster AI and friendly monsters, and even random quests. If that's not enough, you can add your own towns and quests by modifying the definition files without having to recompile the game. All these features and unmatched customizability Zangband arguably the most sophisticated Roguelike game today (although NetHack comes very close).

The TK pack, designed by Tim Baker, makes the game more appealing to novices, with 16-bit tile graphics (which you can replace with your own pictures), sound effects, and a very nice user interface that reduces the need to memorize dozens of shortcut keys. Unfortunately this pack has unfortunately been discontinued, however, and the download is difficult to find in its entirely because the game requires several separate modules (including Sun's TCL 8.0 runtime pack) to work. Well, now you can enjoy this excellent graphical version of Zangband in one easy zip file - just unzip and run :) I have also included AngbandTK (naturally, the TK version of Angband) as a bonus as well. The downside of this TK version is that it won't be compatible with any newer releases of Zangband - at least until Mr. Tim Baker or someone else returns to maintain this excellent version again. Enjoy! 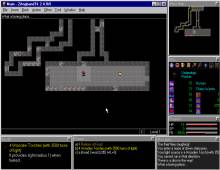