This solid World Builder game that was to be Synergistic's last was sadly among the least-known RPGs of all time. Lead a party of four adventurers charged with the task of rescuing the kingdom from the clutch of evil. Although the game is a true RPG, it is definitely not the game for die-hard RPGers, as it has pre-rolled characters with minimal stats and simplistic combat. The huge number of NPCs, vibrant graphics, and well-written and diverse adventure-style side quests make this culmination of World Builder a great one. 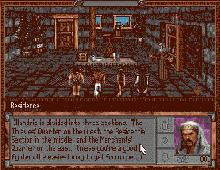 People who downloaded this game have also downloaded:
Vengeance of The Excalibur, Worlds of Ultima: Savage Empire, Wasteland, Knights of Legend, Warrior Dragon