A cute little console-style RPG that is obviously a thinly-veiled clone of NES hit Dragon Warrior (better known as Dragon Quest in Asia), Warrior Dragon is a competent RPG that casts you as a gallant dragon (yes, a dragon) who is on a (cliche) quest to avenge his father who died by the evil Dragon Slayer's swords. Aside from the unusual twist to the fantasy genre (you're playing a dragon who fights humans, not the other way around), Warrior Dragon is a standard top-down anime-style RPG that console fans will be familiar with. The game is a bit too short, and the plot too simplistic, but it still packs enough fun quests to keep Dragon Warriror fans happy-- for a few hours before they boot up the real, far superior, original again. Not on par with Zelda Classic by any means, but a nice try. 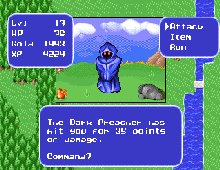 People who downloaded this game have also downloaded:
Zelda Classic, Ultima Underworld: The Stygian Abyss, Lord of the Rings 1: Fellowship of the Ring, Neophyte: Koplio's Story, Ultima IV: Quest of The Avatar VGA