A solid dungeon romp from SSI that's sadly forgotten, Thunderscape focuses more on puzzles and exploration than on detailed statistics-- making it appealing to newbie RPGers and casual gamers than to die-hard veterans. The 3D graphics is excellent, and there are many neat spell effects and magical items to be had. Although it pales beside the better Arena, it is still an above-average RPG with many good riddles and vast areas to explore. Another notable fact is that the game is set in the all-new world of Aden, which is brought to life more fully in later Entomorph: Plague of The Darkfall. 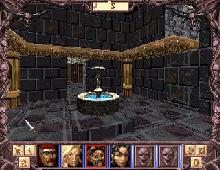 People who downloaded this game have also downloaded:
Entomorph: Plague of the Darkfall, Lands of Lore: The Throne of Chaos, System Shock 2, Shadowcaster, Lord of The Rings 2: Two Towers