Entomorph: Plague of the Darkfall

Aden is a world in turmoil. It is the time of the Darkfall, a malevolent plague that stains the land with its horrific offspring, and threatens to corrupt every living thing. As the story unfolds, you are hopelessly stranded on Kyan, a bizarre island where the inhabitants are being transformed inexplicably into ghastly giant insects. The horror mounts when you realize that you are destined to suffer the same fate as those lost souls you've seen skittering into the shadows - and with this realization, you feel the change begin deep within you. Time is now your worst enemy. Find the root of these evil transformations while you still can -- or drown in the seething sea of mutant insects.

Despite many unique features combined with an interesting story that can be completed in several different ways Entomorph never really took off which is a bit sad since it's a good game. As seen in other games from SSI like the Darksun series and Al-Qadim the game view is from the top and overall it uses pretty much the same game engine and interface although it has quite a lot of improvements compared to these older games.

There are several in-game features such as the computer controlled characters that are well done and unlike most roleplay games all combats are in real time action. I normally prefer the classic game engine as seen in Champions of Krynn and Buck Rogers but this way is good as well although much more simpler which is also the path for the general roleplay features as well since you won't see tons of different stats and similar things that are normally included in roleplay games. But even if you are a hardcore roleplay fan Entomorph: Plague of the Darkfall is worth a try.

A potential hit that never were, Entomorph: The Plague of Darkfall is a fast-paced, action-style RPG with very interesting twists that proves that SSI did not have to rely on TSR's AD&D licenses to make a great game. The game is set in the fascinating world of Aden, a realm that seems to be inspired by Jules Verne and H.P. Lovecraft, mixed with a dash of medieval sorcery. Aden was first introduced in Thunderscape, but wasn't fully portrayed due to the claustrophobic, dungeon-romp nature of that game.

The plot is a fascinating mix of RPG and sci-fi "B" movies: your nation, Kyan, is under the evil cloud of a pestilent insect plague. As Cedric, a wandering squire, you must battle the invading monster-insects, find your lost sister, and deal with your own metamorphosis. You'll need all the power you can get to fight your way through this gauntlet of over-sized, monstrous insects.

The combination of action and unique story make Entomorph a very different RPG. It is reminiscent of SSI's earlier action RPG Al-Qadim, but the engine has been vastly improved to allow more detailed statistics, inventory, and graphics. The game's best feature is your ability to metamorphose: in order to combat the spread of the transformation plague, you can ingest various poisons which give you strength to combat the deadly denizens of the island. The downside, of course, is that doing so will accelerate your transformation into a giant bug. In the end, you must race the clock in order to undo the horrible transformations as well as save your own humanity.

In another welcome innovation that is rarely seen in RPGs, Entomorph features multiple paths to the game's ending, as well as optional subquests. You can decide whether to become a bug or not, but not trying out the transformation does limit your alternatives and make the game more difficult to finish. The non-player characters are well-written, and you will enjoy learning anecdotal insight into the activities of the autocratic Nobles and their experimenting with transforming the life of Aden into what they think will be a better society. Overall, Entomorph is a great action-style RPG that should please all casual RPGers and adventure gamers due to emphasis on puzzles over combat. Die-hard RPGers may frown at the simplistic gameplay, but the fascinating gameworld and plot will appeal to them nonetheless. 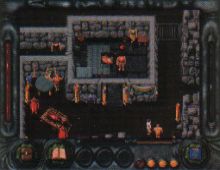 Entomorph: Plague of the Darkfall screenshot

People who downloaded this game have also downloaded:
Lands of Lore: The Throne of Chaos, Druid: Daemons of the Mind, Blood Omen: Legacy of Kain, Betrayal At Krondor, Thunderscape