One of the best "cinematic" RPGs ever made, Stonekeep is an excellent introductory-level single-player first-person RPG that boasts very high production value, but unfortunately suffered in the market due to some game-crashing bugs that should have never made it past beta testing. Once patched, though, Stonekeep shines through with excellent story, immersive gameplay, one of the best user interfaces ever seen in RPGs, and a gentle learning curve that makes the game perfect for newcomers to the genre who find statistics-based RPGs (e.g. Wizardry) too daunting. You are Drake, a hero who finds himself in the ruins of Stonekeep. Your task is to find and rescue Thera, who has been trapped by the evil Shadowking. The game includes a surprisingly well-written novel which describes the backstory about the world, Thera and Stonekeep in great detail, perfectly setting the stage for the actual game.

The game is played in real time, i.e. things happen regardless of whether you move or not. The basic gameplay is very simple, and very easy to learn. Use the arrow keys to move around, use the mouse to pick up, equip, and fight. Right and left mouse clicks do different things, so you must practice and remember which hand holds the weapon when you get into a fight. The monsters are relatively stupid-- my favourite fighting technique is to stand at a door and throw things at the monsters inside, since they can't come out of their room to get you. This means you are safe until you run out of things to throw. It's stupid, but hey, even classic first-person RPGs such as Dungeon Master are rarely popular for smart AI. The game of course makes up for the monsters' low intelligence by throwing hordes of them at you at a time. This means you will die quite often in lower levels are Drake is still weak, but the game is not overly frustrating-- it just takes a bit of patience and preserverance to improve your character stats (which are mostly hidden from the player due to this being a 'light' RPG). Aside from hacking monsters, you will come across helpful NPCs who can sometimes join you for a while. You cannot control these NPCs' behavior, so it is a lot of fun to watch their unique attacks and constant quips. Most puzzles are standard dungeon-crawl fare, e.g. look for hidden switches open up blocked passages, deliver item A to player X, and so on. Nothing special here, although a few sub-quests are quite interesting.

What makes Stonekeep a great game as opposed to merely a good one is the incredibly immersive atmosphere that makes you feel as if you are truly wandering in the halls of Stonekeep. Although most monsters look a little pixellated and two-dimensional (similar to cardboard cutouts in Betrayal at Krondor), the full-screen, first-person perspective and excellent background graphics maintains a suspension of disbelief. Additionally, all cut-scenes occur right inside the gameworld, making the immersion even more powerful. The game's user interface is also very well thought out. The "magic journal" automatically keeps track of everything for you, including player stats, clues, items you have found, and maps. Another very nice feature is that you can easily add your own notes-- not only annotating the maps, but also your own observations about each item you collect. The game provides a large number of shortcut keys to let you get at specific pieces of the journal at any one time, and the spellcasting interface is elegant and effective. In keeping with the strong emphasis on immersion, none of the interface takes you "out" of the gameworld (e.g. to a separate stat/inventory screen); everything is accessible on one screen.

Overall, Stonekeep is an exceptional RPG that ranks among the best games ever made for novice adventurers. The plot develops very nicely from a somewhat cliche premise to a great fantasy tale of deceit, power, and even a trickle of romance. After buying the game, be sure to download the latest patch to save yourself some grief along the way. Highly recommended! 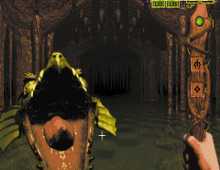