Looking for a different kind of roleplay Spelljammer: Pirates of Realmspace is certainly a good suggestion. The game is a mix of the usual AD&D world and a new Sci-Fi world with weird spaceships and much more.

You are in charge of your own spaceship (a Spelljammer) and you have to complete different missions given not only by one source but from a bunch of different people.

The graphics are quite good when you remember the game is from 1992 and the character portraits are the usual cartoonish style seen from other SSI roleplay games. Overall an average game that might not offer much for the regular gamer but will offer some interesting gameplay for roleplay and SSI fans.

Arguably the worst RPG ever from SSI, Spelljammer is a tedious, flat, and even ugly-looking RPG that somehow manages to exclude all the elements that made TSR's Spelljammer paper RPG world a memorable one. As in the TSR original, Spelljammer is set in a futuristic world that seems like a mix between sci-fi, fantasy, and steampunk. In this alternate universe, people travel to distant worlds through the use of psychically-controlled ships called "Spelljammers". You are given command of your very own spelljammer ship, with a promise to run errands for various characters until you stumble upon the larger (and quite cliche) plot. The game is downright awful in every respect. Games Domain's review highlights some of the most annoying aspects very thoroughly:

"Spelljammer suffers from a limited plotline... a VERY limited plotline. In fact, you may miss the fact that there is one at all since it isn't brought up until later in the game and seems little more important than the missions you accept in the taverns. There's no great "save the world" plotline, nor even a "get your enemy before he gets you" thread. There is no foozle. As a great fan of the SSI/TSR Gold Box Series, I was surprised to find this glaring omission. The plot is the key to any good RPG and this lack significantly impacts the game. It is the difference between dungeon crawling and role-playing. There is no thread to tie the individual elements of this game together. With a good plot, one can overlook a myriad of less than perfect features. Without one, even the most dazzling features will fall short. Since this game has neither, it fails utterly as an RPG game.

The second most important aspect of an RPG is character development, and the game fails on this count as well. You do create your own captain, with the traditional choice of abilities, races, and character classes familiar to those who have played others of the SSI/TSR games. An added characteristic of this game is prestige, which changes depending on how well-known your character becomes. However, creating a personae pretty much ends there. There are no mechanisms for character development and you don't even know what your captain looks like since no portrait is generated.

Spelljammer is a case of what might have been. With an interesting premise and a series of popular and well-executed games already under their belt with the TSR team-up, one would think that "getting it right" would be a no-brainer. Instead, they ignored the very things that made their other games popular: a cohesive plotline, richly developed NPC's, and a three dimensional world to explore.

One might forgive some of this if they were forging ahead and blazing new trails in computer gaming, but it doesn't happen here. The game gets mired in mechanics and lacks any feel or direction for the characters themselves. With their expansion into space, this game falls flat." Bland, banal, and boring -- avoid this Real Dog if you can help it, unless you are curious about how bad a game from SSI can really get. 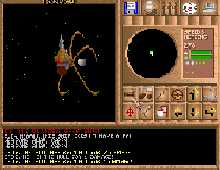 People who downloaded this game have also downloaded:
Pool of Radiance, Pools of Darkness, Curse of the Azure Bonds, Treasures of the Savage Frontier, Dungeons & Dragons: Warriors of the Eternal Sun