Shin Megami Tensei (commonly called Digital Devil Story in English) is an excellent entry in Atlus' Megami Tensei, a hugely popular RPG series that was rarely translated or released outside Japan. Originally debuted on the NES in 1987 with Digital Devil Monogatari: Megami Tensei (roughly Digital Devil Story: Goddess Reincarnation), the series has sold over 4 million copies in total, and span the full range of console systems including the SNES, PlayStation (which was translated into English as Revelation Series: Persona), SEGA Saturn, PC-Engine, and more recently PlayStation 2. The game's atmospheric rendition of demon iconography even inspired an anime OAV and a TV series in Japan. Thanks to the efforts of fangroup Aeon Genesis, you can now play some of these games in English.

Shin Megami Tensei II tells the story of a new protagonist: a amnesiac gladiator named Aleph who fights under pseudonym. The game is set decades after the first game ends, in a Tokyo where the forces of LAW have managed to get the upper hand. There are those who have high expectations for Aleph, but only you can decide what path he takes and what role he plays in mankind's future.

Like all good sequels, SMTII is better than the original in every aspect. The graphics have been improved, the story continues a logical arc from the first game, although given the mutiple-ending nature of SMT, it does assume that the hero in the first game took a certain path. Gameplay has been improved with the addition of many options, best of which in my opinion is the fact that you can now bring up the automap at any time - a necessity in a gameworld that is as large and complex as this one. Even the discos are cooler :)

Like the first game, SMTII offers a cool and unique blend of cyberpunk and Japanese myths. You will fight countless creatures from legends, talk to them, and even recruit and later combine them into new, stronger minions. Also like the first game, SMTII lets you choose which path to take - and like real life, 'good' and 'evil' are not as clear-cut, black-and-white choices as they first appear.

If you are interested in console-style RPGs but are put off by cute anime graphics and simplistic nature of most console RPGs, Shin Megami Tensei II, like its predecessor, is one title that will change your mind. The game's first-person perspective, tough battles, and excellent play value (over 50 hours here) have more in common with Dungeon Master than a typical console RPG. Be warned, though: some scenes depict gruesome murders and other elements that you may find offensive. 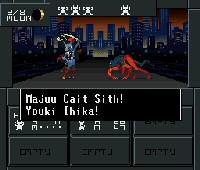