Shin Megami Tensei (Digital Devil Story in English) is an excellent entry in Atlus' Megami Tensei, a hugely popular RPG series that was rarely translated or released outside Japan. Originally debuted on the NES in 1987 with Digital Devil Monogatari: Megami Tensei (roughly Digital Devil Story: Goddess Reincarnation), the series has sold over 4 million copies in total, and span the full range of console systems including the SNES, PlayStation (which was translated into English as Revelation Series: Persona), SEGA Saturn, PC-Engine, and more recently PlayStation 2. The game's atmospheric rendition of demon iconography even inspired an anime OAV and a TV series in Japan.

Shin Megami Tensei tells the story of an anonymous young man (whom you can name at the start of the game) who lives in Kichijouji, Tokyo with his mother. One day, he has a strange dream involving an extra-terrestrial labyrinth, a talking door, a young man tortured by demons, a crucified man, and more disturbing visions. When he wakes up, he soon discovers that the city is being invaded by demons, and this invasion is trigged by a man who threw himself into a well to commit suicide. Your job is to assemble a party and try to stop this madness. In the words of AEON Genesis, a fangroup who translated this game into English for our enjoyment, this "...is the story of one of the final battles between the forces of Heaven and Hell, or their approximate equivalents. It is the story of a demon summoner thrust into the middle of the conflict, being shown both points of view, and forced to make a decision on where he ends up: and you, the player, make the final choice. You will fight countless creatures from age-old legends, you will talk to them and convince them to become your minions, you will fuse them into new, stronger minions, you will fight between the forces of God and his Mesians and the forces of Lucifer and his Gaians, you will decide which, if either are morally right, you will wander through a dark and gritty modern world where demons run wild and things beyond your wildest dreams are possible, and you will have a hell of a time doing it.

Shin Megami Tensei is unique in that rather than force you onto one side or the other, the game presents both sides' arguments equally and leaves you, the player, to make the final choice for yourself. This game is incredible, and everyone should try go play it. NOW."

If you are interested in console-style RPGs but are put off by cute anime graphics and simplistic nature of most console RPGs, Shin Megami Tensei, similar to Shadowrun, is one title that will change your mind. The game's first-person perspective, tough battles, and excellent play value (over 50 hours here) have more in common with Dungeon Master than a typical console RPG. Be warned, though: some scenes depict gruesome murders and other elements that you may find offensive. 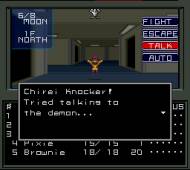